Marine Corps Marathon: The Most Unfortunate Demise of My Flip Camcorder 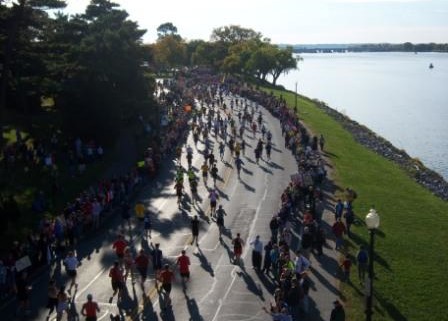 The following is a cautionary tale.

I got up early this morning to watch two of my clients compete in the Marine Corps Marathon here in DC. The weather was beautiful, so I took my Flip Camcorder to get some video of the event. I shot over 30 minutes of video at Mile Marker 1, and headed to the next viewing spot at the Lincoln Memorial. While crossing the Memorial Bridge, I decided to shoot some video from the side of the bridge of the runners below. Unable to get the exact shot I wanted, I decided to stand up on one of the benches next to the railing.

My partner joked at the time that I better not fall into the Potomac River (foreshadowing, anyone?) While framing the shot, I walked along the bench to get a better angle. This would lead to my worst electronics mishap since the Sony Walkman incident of 2001 (see Ipod article). Unfortunately, I misjudged the length of the bench as I was zooming in to video the runners. I found myself stumbling forward, but managed to grab onto a pillar of the bridge. My Flip Camcorder, however, was not so fortunate. I watched in shock and horror as I lost my grip on it. The Flip, living up to its name, flipped into the air, and promptly fell to its death in the Potomac below.

Have you ever been left speechless? Now I know how a little kid feels when he accidentally drops his ice cream cone on the ground.

The moral of the story? You know those wrist straps that came with your camera and small camcorders? I fully understand now the importance of using them!